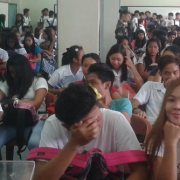 Jeron Rafael Magbalot, former SBO President, opened the program with the prayer, followed by the singing of the national anthem and the ICF Hymn conducted by Mrs. Epigenia Cruz and Mr. Benny Aguinaldo.

Mrs. Ligaya B. Austria, the School Director, welcomed the students warmly and wholeheartedly. She eased the minds of the students and also shared to them about the facilities and equipment that can be found in ICF. Then, Mrs. Epigenia Cruz, the college instructor, broke the ice and gave thoughts to ponder on.

Engr. Cesar Gaspar, the School Registrar, formalized and introduced the administrative staffs of the school – from the president, Madame Eleanor C. Coliamco, down to the cashiers. The dedicated and patient faculty members were also presented.

The deans of the different departments delivered their speeches. First in line was the dean of the Educational Department, Mrs. Evangeline J. Exiomo who was then followed by Mrs. Ma. Salome Sunglao, dean of the FinMan Department.

With talented students all around the school, it would have been a waste if they didn’t show their talents so three students from the Education Department showed off their prowess when it came to singing. Mark Mercado, Hanna Jane Pagaduan, and Mary Jean Ordonio awaken the blood of the other students with their beautiful voices.

After the intermission number, Ms. Beverly Beltran, dean of the CICS department, took the stage to deliver her speech followed by Mr. Jhan Gil Jacalne, the replacement for Mrs. Remelie G. Pespes, HRS Coordinator. He took Mrs. Pespes’ place and delivered a speech to the students. Mrs. Jamie Contreras, the school librarian, oriented the new students about the rules and regulations of the library. Mr. Rolly John Cuenco, Office of the Student Affairs Adviser, followed and gave his speech in his funny and always smiling way.

Then Mrs. Florentina F. Aquino, the School Guidance Counselor, broke the ice as she gave her speech and welcomed the students under her wings. The new senior high school teachers were recognized and applauded.

The program went smoothly and it was great how it eased the obviously nervous students. After the orientation, they knew where to find the equipment and facilities they need inside the school. With this new batch of students The Interworld Colleges, another set had come to bring ICF to the top of its game.