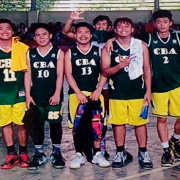 The Interworld Colleges Foundation Inc. (ICF), Paniqui, Tarlac celebrated its annual intramural games last September 13-16, 2016 held at the Paniqui Public Auditorium which was witnessed by the spectators that includes the administration staffs, teachers, students and the athletes alike.

The basketball men’s division was held at the Doña Lualhati Cojuangco Gymnasium. Different teams were so excited and hoped to bring home the bacon and wished to make it to the top.However, CBA team was not lucky enough to enter into the overall championship.

The journey of the CBA team of winning was quite tough. Their first venture with the CICS team brought a hard breath for the advisers, students especially the players considering they lose with only one fight. But with the cooperation and eagerness, they managed to win their succeeding games.

Their man to man match with the HRS team made it impossible for them to succeed for the championship. But it was a good match although they lose the game to the HRS team by three points.