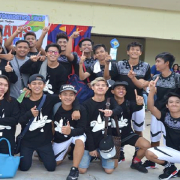 The Interworld Colleges Foundation, Inc. (ICF) Hotel and Restaurant Services Department, has the reason to celebrate and show the world that they still remain undefeatable for the last three (3) consecutive years. What made them hard to beat at the consistent financial and moral support from their classmates and their adviser Mrs. Remelie R. Pespes.

After the tedious and enjoyable week of excitement and courage, HRS team paned its way to the top.

The most awaited part of the activities was the closing and awarding of ceremonies and it was witnessed by the administrative staffs, faculty member, students and the awardees.

The awarding ceremonies were highlighted by Mr. Arnold Adaoag. As he started announcing the winners, spectators from all walks of life came to support and shared their movement as they congratulated all the winners in each game.

The dean of the Education Department, Mrs. Evangeline Exiomo, did the honor to award the trophies and medals, to the CICS department, 2nd place, also to the CBA department, 1st place and the overall champion went to the consistent undefeatable Hotel and Restaurant Services Department with an average score of 224 points prompting them to the applauded as they paned their way to victory.

The awarding ceremony was held on September 14, 2016 at the ICF Gymnasium.

The program ended with a contented smile and appreciation and everyone was happy to end and close the successful 2016 Intramural.